It’s funny to hear people complaining about usability of toys they use. This one is from a friend of mine who just bought a new car a few months ago. The key of a car has two remote buttons:

But there are 3 functions associated with these 2 buttons:

Now the user has two choices: locking the car in a half safe mode (the second option from the list) and locking the car in the full safe mode (the third option from the list) :). The question is why would someone lock the car without this safety feature (pressing the button only once)? My friend is now complaining that he always has to press the button twice to lock the car and he never presses it once because he doesn’t want to leave the car in a half safe mode. 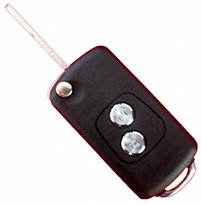 There is another question to this. Who would like to stay locked in a car and not being able to open it from the inside. Imagine if pressing this button once would lock the door from the inside as well (as my friend would like it to have). Imagine pressing it by accident and being involved in a car crash and not being able to exit. So there’s a user’s safety issue involved. But the same the button could be accidentally pressed twice while being in the car (the possibility for this is small but it still exists) and the driver is in danger again.

This situation has two modes (with the car being locked):

There is another mode in which car is not locked:

The solution could very simple (with sensors for example). First thing to do is to offload the burden from a user:

Now the user has the same two buttons and the same three functions but locking the car works differently without user knowing it – so concerning the user there are two functions only. Putting it differently there are still two locking modes but the user doesn’t need to know it because it is not affecting her/him directly. User only presses the lock button once.

Edit 22/6/2010: It just crossed my mind; doors could be automatically unlocked in a car accident so someone could open it from the outside to help. It could be done automatically when the airbag fires up for example.

Interfaces that have 3 buttons and 27 features are always considered bad (Donald Norman, The design of everyday things).

The light switch not in sync