This one cost me one hour today. I used Witch to move between all opened windows of all applications but it stopped working a month ago. Actually it worked but with a delay of 30s after each Atl+Tab which wasn’t usable at all. Recently Witch became a payable application and I would consider buying it ($19 is a bit too much for only one feature I used – hack I really liked it) but I couldn’t figure it out why its response time was so long. Then I searched half the web and I couldn’t find the solution. I played with Keyboard shortcuts and with a bit of luck (damn UI which is not so friendly and not so obvious) I hit the right spot. So here is how to do it:

Select "Keyboard and text input on the left" 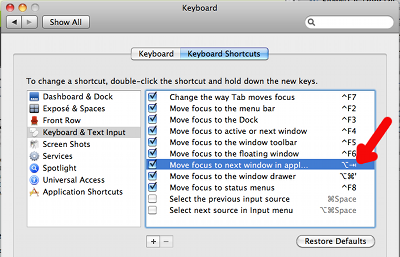 I first tried to double click (and right mouse click) on the whole line since the whole line is marked in blue if clicked! But nothing happened. This really was a weird interface decision – marking the whole line but make double clickable only a small part of it? An Edit button would help as well! And the "oh so great combination" that Apple chose for us is not so
great if non-US keyboard layout is used :(.

Since It was kind of strange that keyboard shortcuts could not be changed I played with it and, as already said, with a bit of luck I hit the right spot. Luck should never be a part of user experience in interaction with an interface! Interface should be more friendly!

The other side of could storage: how cloud storage can save the day