I have just traveled back in time in 1995 when I had Rad Hat 5.0 installed on the system. But this time it was Windows :).

I installed a fresh new Windows XP from an original CD (bought in 2007). I struggled to find drivers for this IBM Thinkpad T40p but it wasn’t that hard either. Then I started to download various applications and tried to install them. I didn’t know that most applications rely on .NET this days (I haven’t been using Windows OS for 8 years now).

It felt like installing RPM in 1995 🙂. OK, we are talking about rather old operating system Windows XP. But .NET should come bundled with the system (or a least give an option during the OS installation) if so many applications depend on it (CDurnerXP was not the only application requiring it). Maybe there are legal or other issues why this is not the case. But it a gives bad user experience. 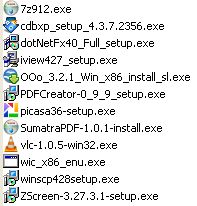 It took 1 hour to install it and I couldn’t install anything else meanwhile. Which is really strange. T40p comes with 1GB of RAM so the memory was not a problem. All together it took me 4 hours to install the system, drivers, an office suite, a media player, a PDF printer, an image editor/viewer and the above mentioned burning application.

I can’t remember taking me so much time to install an OS and a few tools. Last week I installed Ubuntu 10.04 on a friend’s PC and it took 1 hour altogether (apt-get install is lovely) with a printer, camera and a smart phone. And OS X took me a little bit more (static libraries are good) just a month ago.

PS: I have installed Windows 7 on my PC in the office two months ago and it installed everything by itself (system and drivers) quite quickly and it has .NET preinstalled.