A week ago a news about the new MS patent was circulating the web: Microsoft Enables Batteries To Be Inserted in Either Direction. Which is nothing more that a sophisticated battery terminal for cell batteries (AA, AAA, D, C) which I recall being suggested before; we as kids were trying to do a similar thing. And for many people it would be much easier to insert the batteries with no hassle and need for glasses and no worries to make mistakes and break appliances. Reading small + and – signs on batteries and on appliances where signs are usually the same colour as the surrounding plastics and engraved is really a nuisance. But sadly I have read many comments how this feature is useless. 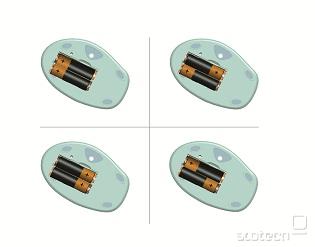 Similar products that could be plugged or inserted in any way or that can not be plugged or inserted in wrong way already exist. Some cordless phones could be placed in a holder in any position. Their bottom was round and the charging connector was round as well. Most of present cordless phones allow to be placed in a holder only with a keyboard facing the user – but placing the phone is still easy. I do remember one of my phones that was often left on a holder in a way that contacts for charging batteries did not touch those in a holder – often the phone was discharged and I realized this only days later – a real bad design! A lot of electrical tools have batteries that can be inserted one way only but are easy to plug as well (with huge connectors and with one battery only and not few equal in a roll).

Other easy-to-plug examples are cylindrical DC connectors that can be inserted in any imaginable way (imagine Nokia’s phone charger or a charger for most laptops). There are others DC connectors which can be connected in only one possible way. While later don’t allow users to make mistakes, former are also easier to plug!

Some audio connectors are a good example of a good design. TRC or audio jacks are easy to plug (only one possible way). RCA or cinch are also easy to plug but there are always two colours (red and white) which have to match sockets (and even if sockets don’t match sound still works). While the same connector for video signal has only one (yellow) plug. These are simple to plug. But there are other audio/video connectors with thin pins that can get easily twisted like DIN connectors and are hard to plug in as well! Similar to these (regarding pins) are VGA, S-video (DIN), DVI, SCART and similar video connectors that have to be carefully inserted in a socket because their pins can get easily twisted. Improved video/audio connectors are Firewire and HDMI. They also can’t be plugged in any possible way but are much more robust. 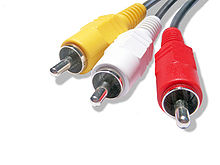 AC power connectors can also be inserted only in one (e.g. British power plug with three rectangular pins) or two possible ways (e.g. European power plug with two round pins) but at least their pins are more robust (but I already managed to twist e.g. US power plugs and I broke many Europeans plugs).

I could go on but I think I made my point. Easy-to-use-and-make-no-mistake holders/batteries/plugs do make sense (even if some claim that +/- position is not hard to understand). Easier plugs we have, less hassle is needed to use them. What it
bothers me about this patent is that such things should be widely accessible and not patented.

Answering a doorbell with a mobile phone

One short paper and two posters accepted at INTERACT 2015