Passwords are bits of personal information that we constantly need to log in to our computers, web pages, phones, and other services. Some of us even manage them with dedicated applications on our desktops (e.g. KeePass) or on the web (e.g. LastPass). However, they might be very dull and hard to remember especially if we try to make them hard to crack.

Over the years I have been asking people how they choose their passwords (if someone wants to do a study about it let me know). I for example choose a saying like ‘too many cooks spoil the broth’. Then I take the first or the last letter of every word like ‘tmcspb’ and lastly I put in some numbers like ‘t0m9c8s7t6b’. For safety the last or fist char can be in upper case. I meet a guy whose passwords are quotes of famous people (in different language than the original). A system admin I once meet creates passwords for his users with their first name and a year in which password was created like ‘Jack2014’ (very secure indeed :/).

As seen above, there are gazillions of ways to create (un)safe passwords. But this guy thinks of passwords as a therapy – a positive affirmation. Apparently, as passwords are used several times a day, they can subconsciously change our behaviour if containing the right message. For example:

There are many other examples in his blog post that he claims that worked (or not .. e. g. he can’t loose weight).

Passwords can apparently be used also to learn things as explained in the comments of this post on Lifehacker. For example this guy learned his wife’s phone number:

"I had to set my cell phone’s password to my wife’s cell phone number so I could remember it. It was just embarrassing not knowing it after we were married. I had just always hit the button with her picture on it, like a fast food cash register."

But it didn’t work for this person who tried to learn all USA presidents and their sequence:

"eg. W4$h1ngTon, 2j0HN@d@m$, j3FF3r$0N… My hope was through repeated typing I would remember who was associated with each term. FYI it didn’t work AT ALL. After about a week of typing my password an average of 97 times per day I ended up just relying on muscle memory and not remember any of the presidents."

Maybe self-logging and positive affirmation through passwords might do miracles. How many times do you use a password in a day? 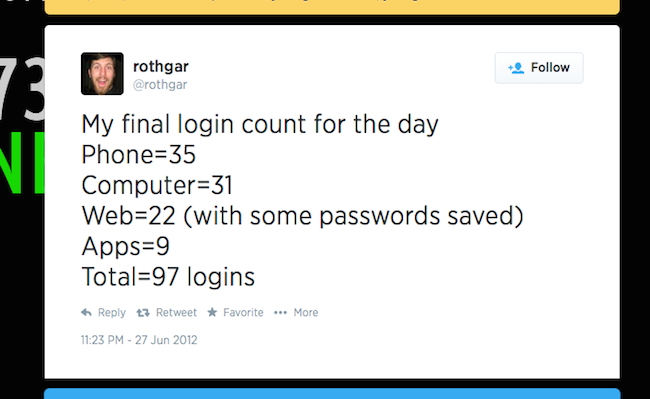 Taps – a collection of designs

How world events change the visits on this blog