We have three boxes to recycle litter:

I don’t mind recycling. Actually I like recycling because I makes me feel a better person. I had 7 boxes in Sweden to recycle almost everything: cardboard, paper, colored glass, transparent glass, hard plastic, soft plastic, wood and similar hardware. But each one had its own litter box with a picture of what goes inside.

Now I have two identical boxes and no sign of what goes in. Lets look at the example that often happens to me. Every two weeks the 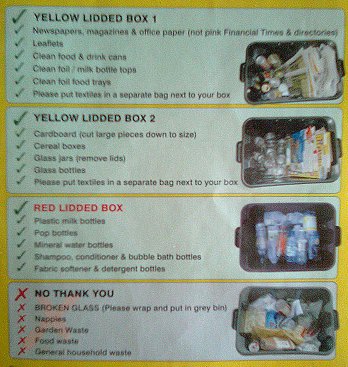 It might be only me but I really think it’s stupid to go through this process every time. I thought of simplifying the procedure with writing or drawing a picture on the lid of what goes in the box.  But none of the neighbors has done something similar and I’m not sure if I can do it (city council’s property). Then I decided to have paper in the left and cardboard in the right box. But I can’t never remember what I have decided and mix the two again and again. So I gave up.

Thankfully, city council has come to help me. As of August  they changed the rules:

There will be only two boxes of different color and lids :). Ta!

Taps 31: a lot of instructions to wash hands