Ok, a tap I actually haven’t used, but it looks weird enough to think about the fun and toil moments with it.

"… On top of the frosted ripple
surface sits a metal ball. An array of electromagnetic sensors detects
that ball’s position. Moving the ball in or out from the center controls
water pressure. Moving it around [left hot – right cold] controls temperature.

The
surface glows red or blue to denote how hot or cold it is. The two
separate channels combine the hot and cold water to get the perfect mix… " Yanko Design – From beyond function, Water Ball Ripples, 27.2.2008 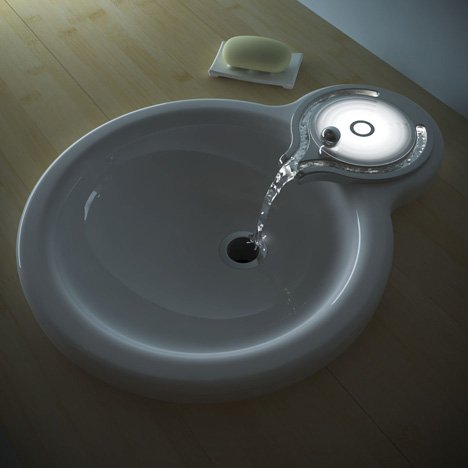 This tap is really nice looking, probably funny to play with and a piece of equipment to show to visitors. But it has some flaws (or disadvantages) as well, so I think not everyone would adopt it: