As I am coming from a Linux world I am quite used to some software that is available for Linux. One of the software I used often was Texmaker. After switching to OS X I used TexShop (as it comes bundled with MacTex) for a couple of years. It is a good LaTex editor and it (besides Latex) also supports Xetex (a TeX typesetting engine that uses Unicode and system fonts) out of the box and it nicely updates PDF documents almost on the fly.

But I recently switched back to Texmaker because of some of its strengths that I really like (most UI related):

But it doesn’t work with Xetex right away. There is a simple solution
to this, though. All it is needed is to change two preferences
fields (assuming you have MacTex installed).

Under Commands change Latex field to:

The second command can include several commands divided by | sign. So
for example we could compile the .tex file with xetex first, then
compile the auxiliary .aux file and compile the .tex document twice more
(why this is necessary is beyond this post). User field should now look
like (all in one line):

Edit: there’s one drawback  —  if there are some errors in the .tex
document, Texmaker hangs up and only forcing it to shut down helps.

Taps 27: multiple taps over a round sink

Finder and its Preview function 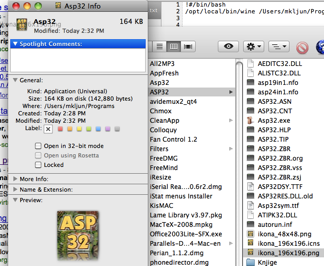 Executable script in OS X for standalone windows based software